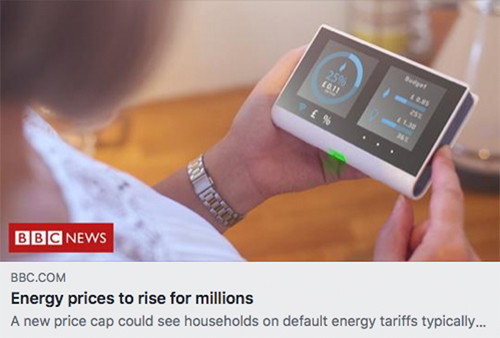 Energy prices to rise for millions

More than half of British households are set to see an increase in the cost of energy in April after the regulator, Ofgem, raised price caps.

Ofgem sets maximum prices that can be charged for gas and electricity to those who have not switched suppliers and are on default tariffs.

The new cap could see these households typically pay an extra £117 a year.

The regulator is allowing suppliers to cover the higher costs they face on the wholesale market.

"We can assure these customers that they remain protected from being overcharged for their energy and that these increases are only due to actual rises in energy costs, rather than excess charges from supplier profiteering," said Dermot Nolan, chief executive of Ofgem.

About 11 million households are on default, or standard variable tariffs, and are set to be affected. Such a household, which uses a typical amount of energy and pays the bill by direct debit, should now expect to pay £1,254 a year.

Consumer groups say they can shop around for a better deal.

Another four million people are on prepayment meters, so pay for their energy in advance. The price cap will rise on their tariffs too, with the typical customer paying £1,242 per year, up by £106 from the previous cap level.

'It could make a big difference to the bills'

One customer set to see a price rise is Jackie Foran, of Northenden, south Manchester. The 65-year-old ended up on a default tariff after her original supplier went bust, and pays about £100 a month despite living alone.

"I think quite a lot of elderly people will be caught by surprise, because when somebody says [the price] is capped, you think you don't have to do anything, you don't have to worry, it will all be perfectly fine," she said.

"But you could still be on an expensive rate, even though it is capped. It could make a big difference to the bills.

"In my mind, they are not really capping it are they?"

She intends to shop around for a better deal before April.

How do these caps work?

Energy price capping is a flagship government policy designed to protect the vulnerable and those who have stayed loyal to their energy supplier.

Ofgem sets the cap for households in England, Wales and Scotland. Northern Ireland has a separate energy regulator and its own price cap.

Ofgem sets a cap on the unit price of energy for electricity and gas, and a maximum standing charge.

Energy companies are not allowed to charge default tariffs that are higher than these thresholds.

The first cap came into force at the start of January. Ofgem said this price limit meant households typically saved £76 a year on what they would have been charged without the cap.

Ofgem has now reviewed the cap and will allow suppliers to charge more from April.

The cap for those on prepayment meters came into force earlier but has also been reviewed and revised up.

Why are prices rising?

Prices are rising because Ofgem is allowing suppliers to charge more to cover the higher wholesale costs they face owing to the higher global price of oil. Wholesale costs account for more than a third of a typical energy bill.

The regulator considered the costs faced by suppliers in the six months to the end of January when setting the new cap for April.

About £74 of the £117 increase in the default tariff cap is due to higher wholesale energy costs, it said, with costs of transporting energy and environmental costs also rising for suppliers.

Alex Neill, from consumer group Which?, said: "This eye-watering increase to the price cap will be a shock to the system for people who thought that it would protect them from rising bills."

"Energy suppliers have traditionally been the ones blasted for blaming price rises on wholesale costs," said Richard Neudegg, from price comparison site Uswitch. "Now, shamefully, Ofgem is doing the same thing, as the reality of energy prices catches up with the political hype."

But Lawrence Slade, chief executive of Energy UK, which represents suppliers, said that energy companies were facing "drastically rising costs" which were outside their direct control so it was correct for Ofgem to reflect that when setting the cap.

Will my bill increase automatically?

The cap is per unit of energy, not on the total bill.

So people who use more energy will still pay more than those who use less.

The new cap takes effect in April, after the worst of the winter has gone, so the impact of higher prices might not be as great as it could have been.

Ofgem points out that, without the existence of the cap, households would have been paying more.

Its analysis suggests that default tariff customers could be paying around £75 to £100 a year more on average for their energy had the default tariff cap not been introduced, despite the increase just announced.

People can also shop around for a cheaper fixed deal. This would make the cap irrelevant for them.

Ofgem and consumer groups say switching could save a typical household £200 a year, although this differential has narrowed from about £300, partly as a result of price bunching after the cap was introduced.

The level of the cap is updated every six months, at the start of April and the start of October, this year and next year, and possibly beyond.

Forecasts are already suggested that the cap could be lowered next time, saving households money from October.

Energy Minister Claire Perry said: "We were clear when we introduced the cap that prices can go up but also down." She added that energy suppliers were "no longer able to rip off customers on poor value tariffs".

But Labour's shadow business secretary, Rebecca Long Bailey, said: "This government is resting on its laurels while big energy companies are ripping off their customers."

Get in touch for a free no obligation consultation or quotation

Please get in touch with any questions you may have or if you wish to arrange a free inspection and quotation.

Arrow Insulation
5.0
Based on 28 reviews

At Arrow Insulation we are excited to operate in the sector we do. Not just because we make a positive difference to the comfort of your home, but also because we are doing our bit to help reduce energy requirements and the carbon footprint of homes and businesses.

So much so that we will donate a tree for every home that we work on. If you choose Arrow Insulation for your requirements we will plant a tree and send you the certificate. We donate through the Trillion Trees Campaign backed by the UN.

Arrow Insulation is a Corporate Member of The Dorset Wildlife Trust, giving back to local environmental projects and its in line with our efforts to reduce carbon emissions and improve our local impact. Read more about their work here: www.dorsetwildlifetrust.org.uk